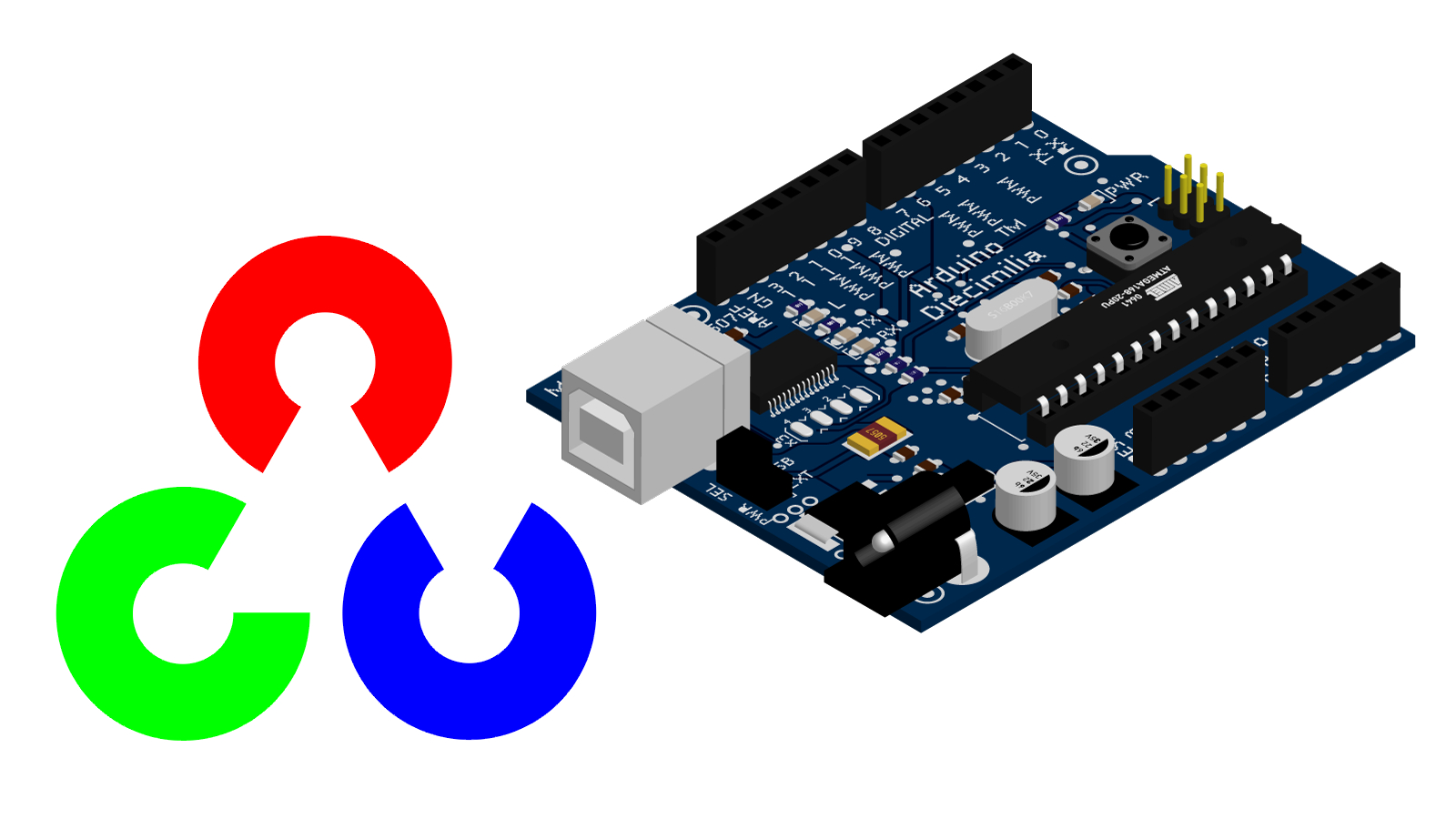 From OpenCV to Arduino

Create and use a smile detector to send information to the arduino in order to send specified set of commands to the servo to execute a dance.

OpenCV has a library dedicated to identifying different regions of human faces and smiles. We incorporated these libraries (haar_cascade files) to create a face and mouth detector on a computer, using Python. Essentially the program takes the video feed from a webcam, runs the detector on the images, draws a square around the face and mouth regions, and shows the results in a live window. To increase the efficiency and accuracy of the mouth detector, we limited it to only analyze the images within the detected face regions. 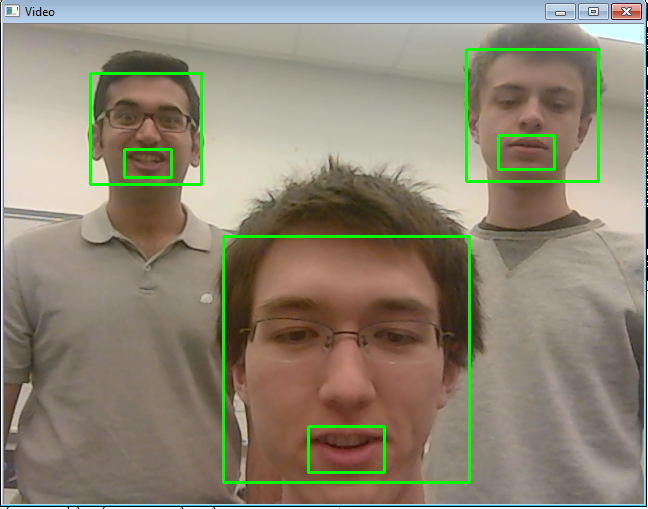 This beginning iteration worked very well for our purposes and consistently delivered working results. Occasionally the program would identify faces in the background that were not there and the face detector would only detect them if the person's face was angled directly toward the camera with some flexibility for faces that were turned slightly away from the camera, but it was working fairly consistently. Using this as a starting block, we attempted to incorporate the OpenCV smile detector. However, no matter how much testing or strategies we tried to use, we could not get it to produce any working results. For example, one of our strategies was to limit the smile detector to the area within the detected face and later to only within the mouth region, but it continued to fail. We then decided to construct our own smile detector.

We created a new smile classifier by using machine learning to train our computer to identify smiles. We obtained a database of 20,000 labeled smiles from Olin Professor Paul Ruvolo and used a Python library called scikit-learn to generate a smile detection model using an algorithm called Logistic Regression. Essentially, it calculated the probability that the read image contained a smile and returned a generalized image of a smile. When the program runs, the classifier compares the detected faces to the generalized image and calculates a log probability to determine how similar detected faces are to it. It then returns the value which we set a threshold on for either smiling or not. With this classifier, we were able to detect smiles reliably and produce working results. 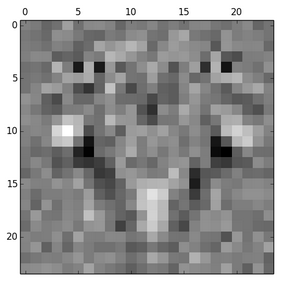 The generalized image of a smile that the smile detector uses to compare detected faces to in order to determine if the person is smiling. This image was created from training 20,000 labeled images. 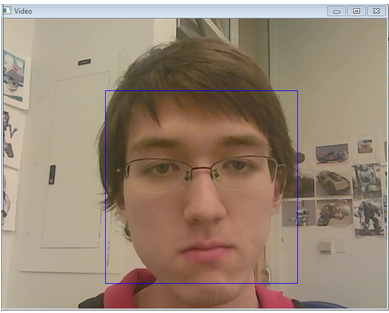 Figure 3a: An image from the video feed of the smile detector when a person is not smiling 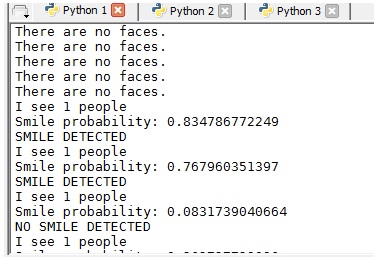 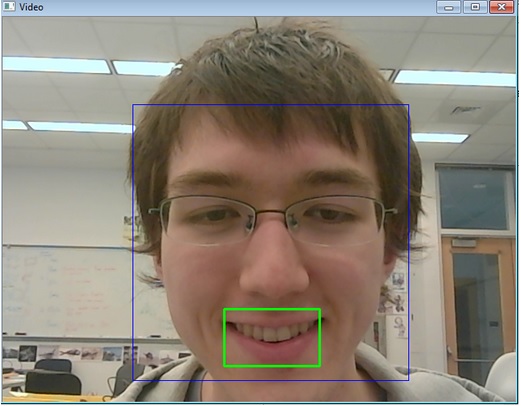 Figure 3c: An image from the video feed of the smile detector when a person is smiling. Note how the smile probability is above 1.0. 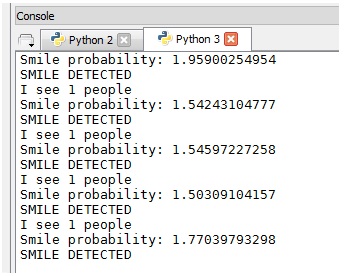 The console printout for figure 3c, when a person is smiling.

There is some variability in the returned values. For example, although the program correctly identified when Julian and Michelle were smiling, the returned values for Michelle were consistently lower than Julian’s. Because of that, the smile detection sometimes detected smiles on Julian when Julian wasn’t smiling, and sometimes failed to detect smiles on Michelle when Michelle was smiling. This problem could be solved by adjusting the smile probability threshold for each individual, but is not a practical solution if this robot is to be used by many people. Instead we set the threshold at a value that on average detects smiles for the majority of the people. We determined this number by the 20,000 smiling data we trained the model off of.

We also found that the background and factors such as lighting affect the smile detection as well. Because of this, we decided to keep these factors constant by always using it in the same place, under the same background and lighting. 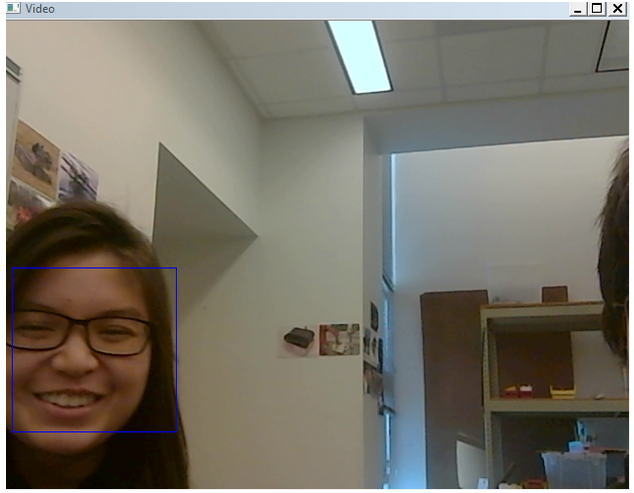 Figure 4a: Picture of Michelle smiling, but a smile is not detected.

Figure 4b. An image from the video feed of the smile detector. Note how the percentages are different from figure 3b.

We have three degrees of freedom for the body (swaying, heaving, and pitching) and a fourth degree for the wings (heaving). We tested out a library called VarSpeedServo which can control up to 8 servos simultaneously, which we ended up using instead of the standard Arduino Servo library.

These numbers on the serial port are read by the arduino, and the arduino activated a combination of servos to execute one of 3 dance moves for the robot.

We chose to use the webcam camera instead of a detached camera because we have found that the arduino does not have enough capacity to process everything quickly enough for the smile detection to be useful.